WITH Christmas fast approaching, Canberrans are already spending up big.
A national survey conducted by online store oo.com.au revealed that 62 per cent of Australians are planning on spending more than $400 on presents this year. With most of the money expected to be spent on children, parents often find it hard to control spending at this time of year.

The director of Money Mechanics and financial advisor, Scott Malcolm, said while Christmas was fast approaching, now was a good time to seriously think about Christmas and how much you want to spend.

“It’s really about getting back to basics and really looking at what’s important from our family values point of view, because it shouldn’t be about money and how much you do or don’t have,” he said.

With many families experiencing financial pressure after the latest rates rise, Mr Malcolm understood that some were simply strapped for cash.

“The impact of that rate rise, especially because the banks have gone over and above it, doesn’t really help families that have a fairly stringent cash flow,” he said.

Mr Malcolm said although this Christmas was too close to make major hanges, there were things people could do in time for Christmas 2011.

“We know what date it’s going to fall on, so let’s actually put a plan in place,” he said.

Mr Malcom believed it was a good idea to have an open conversation with family about how much you were going to spend on Christmas and what sort of celebration you wanted.

He suggested that Secret Santa could be a good solution for adults in large families.
“It comes back to your values and what’s important to you,” he said.

Mr Malcolm advised Canberrans to start saving for next Christmas by using a mortgage offset account to reduce day to day interest, that people could then draw back on when it came to Christmas, or set up a high interest savings account. He also had some advice on shopping for presents without blowing the budget.

“When you go Christmas shopping do your list before you go out and know what you are going to buy and put a price limit around it before you go out, so that when you get in to the emotional situation of being in the shop looking at all the shiny stuff you’ve got your list,” he said.

“The same endorphins kick in when you spend money as when you exercise, as when you drink…it makes you go `wow this is great’. It’s all about purpose in mind. There’s nothing sexy, there’s nothing fun about it but if you’re creative about it you can make it fun.”

Mr Malcolm said while it was nice to be generous, it was important to find a way to be able to give gifts without ending up in an adverse position.

“If you are going to go into debt to do it, then it’s a matter of saying `what’s my plan going into 2011 to pay off that debt’ and then get a strategy in place to actually save for 2011,” he said.
“If you’re only paying the minimum amount (on your credit card), the banks win at the end of the day.” 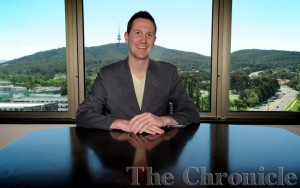