The past few weeks have seen increased volatility and sell offs across the share markets both here in Australia and Globally which often is a testing time for investors as we hear the news headlines and the ‘billions of dollars’ in value which is lost.  For our self funded retiree clients and accumulation clients I remind everyone that growth investments have two return elements, the income returns or dividends which are yielding around 5.1% on the share market at the moment, and then the capital return which often attracts all the attention as it moves day to day in the listed markets.

We have put together these notes based on some of the market commentary we have been receiving at the moment.  My comment to all our clients who have exposure to the market, through their superannuation or wealth creation portfolios is to stay the course of the overall strategy.  Continue to keep a diversified approach across a variety of asset classes and sectors and with any cash currently on the sidelines use this to average in to the downside and buying opportunities as they present.  The underlying fundamentals are still relatively strong and as with the Global Financial Crisis the ‘new normal’ is that we are seeing increased volatility in the markets.

So what is happening?

While markets are presently undergoing a period of weakness, the world economy remains in reasonable shape.  The US, European and Japanese economies are all in recovery mode and China, while slowing, economist expect that China is still likely growing at over 5% in real terms, underpinned by a range of stimulatory policies.

The areas of the Global Economy which are in ‘technical recession’, Russia and Brazil are the standouts in this regard due to both lower GDP and currencies and are too small in to drag down the entire global economy.

Meanwhile, growth in Australia and New Zealand is being held back by a relentless downturn in commodity prices.  Even in this region, however, falls in the Australian and NZ dollars (compared to the US Dollar), together with encouraging monetary policies from the Reserve Banks, are providing a cushion to maintain acceptable growth rates.

Dr Shane Oliver Chief Economist at AMP Capital Investments has been quoted as saying “Share markets are full of emotion and right now there seems to be a lot of nervousness around. In fact this has arguably been the case since April during which we have seen several major share markets have decent corrections, eg Chinese shares -32%, Asian shares (ex Japan) -17%, Emerging market shares -16%, Eurozone shares -13% and Australian shares (around 16% based on yesterdays trade). Of course the US share market has been relatively stable with at most a 4% pull back (following the larger falls overnight last night this is closer to 8%), although being virtually flat year to date it might be described as being in a “stealth correction”.

It is also good to note that seasonally the market trend between August and November is often a downward one. 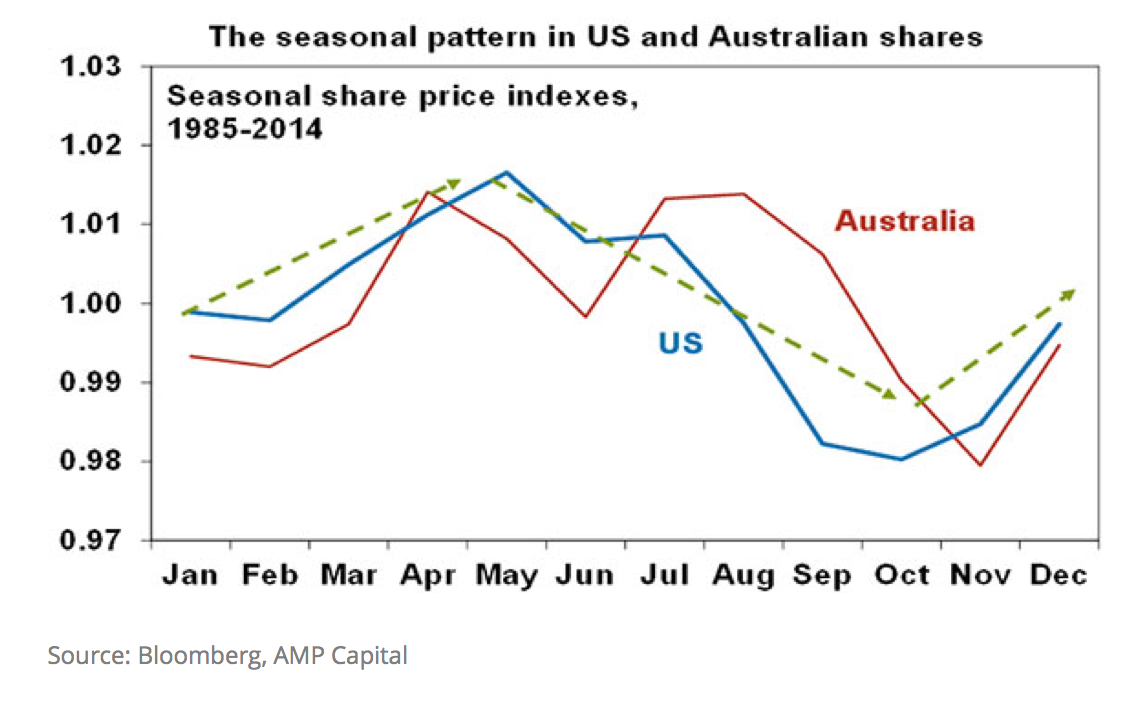 Is this a correction of something worse?

Dr Shane Oliver has commented that “The important issue though is whether current weakness is just a correction or the start of a new bear market? Periodic sharp falls in the range of 5% to even 20% are quite normal and healthy in that they help the market let off steam and the rising trend resume. Of course it becomes more concerning if the rising trend in share prices gives way to a declining trend and a new bear market sets in.  On this front the view remains that the cyclical bull market in shares likely has further to go. Put simply shares are not seeing the sort of conditions that normally precede a new cyclical bear market: shares are not unambiguously overvalued; they are not over loved by investors; uneven & below trend growth is extending the economic expansion cycle; and monetary conditions are likely to remain easy for a while yet. Looking at each of these in turn. 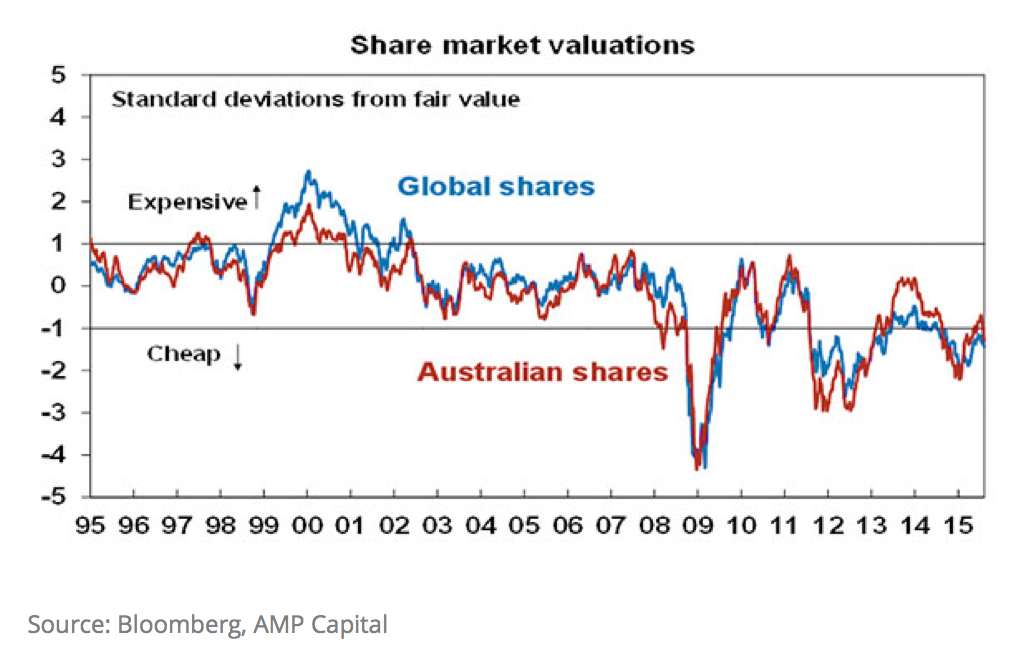 With this regard it is important to hold true to your overall strategy which is at times having cash on the sidelines to take advantage of buying opportunities as they arise.

We are likely to see continued pockets of turbulence in China, its Asian trading partners, and commodity prices, and investors should remain cautious on these markets in the near-term, given the broader economic headwinds.  While downside risks have clearly escalated, we do not expect an uncontrolled deceleration of the Chinese economy. With over $3 trillion in reserves, the Chinese government has both the ability and willingness to cushion its economy.  In addition, recent high frequency indicators on housing prices and retail sales have shown tentative signs of stabilisation.

In the United States, international risks and the disinflationary impacts from declining commodity prices complicate the Federal Reserve’s looming decision to raise interest rates.  The expectation is the Federal Reserve will increase rates in September, but it’s now a very close call (economists have roughly 55% odds) whether or not a raise will happen at that time.  Importantly, that decision would be predicated on improving US economic conditions.  US employment growth remains robust and the broader economy has reaccelerated after a slow start to 2015. Investors should continue to expect healthy US real GDP growth of 2.5-3% over the next 12 months, which should help push the global economy forward.

European financial markets have faced significant downward pressure in recent weeks. But the domestic euro zone economy continues to improve, and boosts from a cheaper exchange rate, lower oil prices, aggressive monetary policy, and attractive relative valuations, provide the building blocks for our continued expectation of strong performance in this market over the next 12 months. We are closely monitoring the situation for potential opportunities in this market given the strong fundamentals.

Australia and New Zealand: A bumpy road to recovery with an end to the resources boom

The overarching challenge for the Australian and New Zealand economies, and for their associated share markets, is an end to the resources boom. This can be seen in the plunging prices of bulk commodities, such as iron ore and coal (Australia) and of agricultural commodities such as milk and timber (New Zealand). However, economic growth rates in the order of 2.5% in these countries still compare favourably with growth in recovery-mode regions such as the eurozone, Japan, and even the US. Weaker commodity prices are not all bad news – they are driving currency weakness, which is proving to help tourism and import-competing industries; and they are keeping inflation low, thereby giving the Reserve Banks of both countries scope to cut interest rates further, if required. The net yield on Australian shares now stands at 5.1%, which is twice that of interest-bearing alternatives such as term deposits.

Dr Shane Oliver has commented that “First, while there is a high risk of a further correction in share markets in the next month or so, from a broad brush perspective we are not seeing the signs normally seen at major cyclical peaks in shares and so the cyclical bull market in shares looks like it has further to go.

Second, China and the Fed are probably the key risks worth keeping an eye on.

Third, while there will be cyclical bounces in commodity prices and emerging market shares the time to “blindly overweight them” was last decade and until supply imbalances in the case of commodities and structural problems in parts of the emerging world are resolved it makes sense to be selective and cautious when investing in them.”

Again I would remind investors to focus on the long term view and their income verses capital requirements.  Keeping a diversified portfolio across a range of Defensive (Cash, Fixed Interest) and Growth (Shares – Australian and International and Property) based investment across both listed and unlisted markets.

If you are concerned about any element of your portfolio or strategies please do not hesitate in contacting us at the office.