This time of year in the lead up to the Federal Budget there is often ‘noise and media’ around Superannuation, as the government decides what changes to tax system they may implement to assist with balancing of the budget.  I always try to stress to people that most of the media you hear around superannuation is not yet legislated such as the often common comment by clients that they can not access their super until age 70 (the rules are still a preservation age of 60 with some people born pre 1960 able to access their super at age 55).

Under the previous Federal Government the super guarantee (SG) was set to rise 0.5 per cent each year from 1 July this year through to 12 per cent from 1 July 2019.  However, as a part of a deal to abolish the ‘mining tax’, the current Federal Government has extended this time frame out to 2025, as shown in the following table: 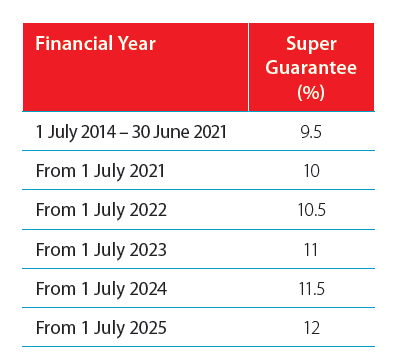 While the SG rate increase overtime is a positive move for employees, you should not rely on this totally to achieve maintenance of your lifestyle in retirement.  It is worth considering making voluntary contributions to your super to meet any potential retirement gap. There are a number of ways you can do this.

For most people, the simplest method is salary sacrificing. Talk to your employer about deducting extra money from your pay before you pay income tax on it at your marginal tax rate. Extra pre-tax contributions (called concessional contributions) are taxed at just 15 per cent. If you’re under 49 (at 30 June last year) you can contribute up to $30,000 each year into your super this way, increasing to $35,000 aged 49 or above.

You can also make after-tax (also called non-concessional) contributions to your super. As you’ve already paid tax on your income, the government won’t tax you again on money going into your super account – and remember it’s tax-free when you access it after retirement! But be careful – there are limits on how much you can contribute each financial year before the government taxes it again and it is locked away until preservation age of 60. Currently that amount is $180,000, with any amount over this being taxed at 49 per cent (for those under 65, under a bring forward rule, that number jumps to $540,000 if you don’t make any contributions for the next two years).

You may also be able to take advantage of generous government concessions. For those who earn less than $49,488 a year (for the 2014/15 year), the government will give you a ‘Co-Contribution’ of up to $500 each year depending on your contribution. Of course, there are other requirements which need to be met, so talk to us before taking action.

If you have invested well and made a capital gain on the sale of an asset, the government will tax you at your marginal tax rate. However, if you have owned the asset for more than 12 months you are given a 50 per cent discount on the capital gain before being taxed.

However, if the same asset is held in your super account the tax rate on the assessable amount (if held for more than 12 months) is a maximum of 10 per cent.

Lastly remember to consolidate your super into one account to avoid paying multiple administration fees. There are other super strategies and concessions depending on your personal circumstances – contact us today to find the best plan for you to boost your super balance and ensure you can maintain your retirement lifestyle.